Yahya al-Hajuri al-Haddaadi has numerous statements belittling the Companions (radiallaahu anhum) and from them is his accusation against Uthmaan (radiallaahu anhu) - despite acknowledging that it was an ijtihaad from Uthmaan - that he instituted a "mother of all innovations" that is considered a blameworthy "bid'ah" and a "mukhaalafah" and he is speaking here of the additional aadhaan for Jumu'ah. After the debate is exhausted, the issue comes down to al-Hajuri and his followers having nothing (zero) in their hands to invalidate the consensus of acceptance from the Companions with respect to this adhaan of Uthmaan (radiallaahu anhu) - except some doubts about a narration from Abdullah bin Umar which shall be dealt with in this series. Before we continue, a word of truth: Sufficient honour, respect and nobility is it for us to defend the honour of Uthmaan (radiallaahu anhu), exonerate him from (the charge of) instituting bid'ah and dalaalah and sufficient humiliation, disgrace and misguidance is it for al-Hajuri and his extremist followers in waging a war against Ahl al-Sunnah to argue for and defend the charge of instituting bid'ah against Uthmaan (radiallaahu) first leveled by the Raafidee donkey Ibn al-Mutahhir al-Hillee whom Ibn Taymiyyah refuted in Minhaj al-Sunnah! Thereafter, they pursue and seek out the mistakes and errant opinions of certain scholars to help them find a way to defend Yahya al-Hajuri whilst claiming to be people of evidence.

The Reliance Upon the Statement of Ibn Umar

Note: The report of Naafi' from Ibn Umar that the adhaan of Uthmaan is a bid'ah is not established, rather it is munkar. See Shaykh Rabee's excellent refutation against a student of al-Hajuri in this regard (download the file).

The Hajaawirah Haddaadiyyah have fought a great battle to exonerate and defend al-Hajuri in the issue of accusing Uthmaan (radiallaahu anhu) of instituting bid'ah into the religion, and they have a variety of ways in this battle. From these ways is to make use of the statement of Ibn Umar (radiyallaahu anhu) that is reported by Ibn Abee Shaybah in his Musannaf:

The first adhaan on the day of Jumu'ah is an innovation.

Thinking that this is rejection from Abdullaah Ibn Umar of the action of Uthmaan (radiyallaahu anhu), whereas in reality - if we accept for argument's sake that it is authentic - it is a statement similar to the father of Abdullah bin Umar which is Umar bin al-Khattaab (نعمة البدعة هذه), "What an excellent innovation this is" in relation to the Taraaweeh prayer in Ramadaan. For the use of the word (bid'ah) here is with its linguisting meaning, not shar'iyy, legislative meaning.

And what was done by Uthmaan of (adding) the first call of prayer, the people were agreed upon it after him: The people of the four madhhabs and other than them, just as they agreed upon what Umar had also instituted of gathering the people behind a single Imaam in Ramadhaan. 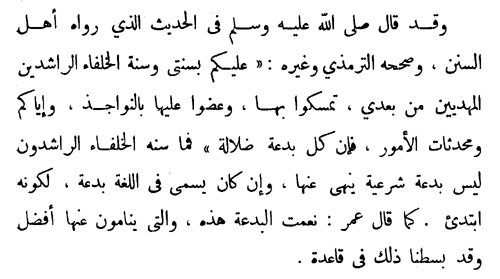 So whatever the rightly-guided Khulafaa instituted is not a legislatively (defined) innovation that is prohibited against, even if it is described as "innovation" linguistically, due to it having been initiated. Just as Umar said, "What an excellent innovation this is..."

This shows the correct understanding of the saying of Ibn Umar, he is simply describing the adhaan instituted by Uthmaan (radiyallaahu anhu) with the linguistic meaning of bid'ah, meaning it was not present before and is something new.

The same is said by Shaykh Ibn Baaz (here) when he was asked specifically about the adhaan of Uthmaan:

And for this reason, the Companions accepted [the instituted adhaan) from him - meaning Uthmaan - in his time, and the Muslims acted upon it after him... and likewise what Umar (radiallaahu anhu) did of gathering the people behind a single Imaam in the Taraweeh prayer in Ramadaan.

So the statement of Ibn Umar that the adhaan of Uthmaan (radiyallaahu anhu) was bid'ah is agreed upon by everyone, for it is a bid'ah in the linguistic sense of the word. And had it been a bid'ah in the legislative sense of the word it would mean all the Companions affirmed Uthmaan upon bid'ah and dalaalah and mukhaalafah (opposition) to the Messenger (sallallaahu alayhi wasallam) - see Shaykh Ibn al-Uthaymeen's speech (here). This is how a person would view the situation in reality. And in any case, if any other Sahabee differed, the matter would return back to the Khulafaa and what they instituted as commanded by the Messenger (sallallaahu alayhi wasallam). Ibn Taymiyyah said in al-Majmu' (32/347)

For when others oppose the rightly-guided Khulafaa (in a matter) it is their saying that is superior because the Prophet (sallallaahu alayhi wasallam) said, "You must follow my Sunnah and the Sunnah of the rightly-guided khulafaa after me. Hold fast to it and bite onto it with the molars. And beware of the newly-invented matters, for every innovation is misguidance."

Now a person might ask: What about other scholars who might have held the same view of the second adhaan being in opposition to the Sunnah of the Messenger (sallallaahu alayhi wasallam), are they misguided and deviant as well? The answer to that question is that those Scholars who held this view, they are excused because the matter was not taken up with them and exhaustively debated such that their error became apparent to them. Further, unlike al-Hajuri, the Companions were safe from the tongues of those scholars, for we see al-Hajuri having a range of other revilements upon the Sahaabah, such as accusing them of participating in the murder of Uthmaan (radiallaahu anhu), innovating Irjaa', being punished twice for two disobediences (see here) and other such affairs. Thus the persistence of al-Hajuri and his followers in this matter, after the evidence clearly exonerates Uthmaan (radiallaahu anhu), then it is a sign of following desires. As for their use of the positions of certain scholars like Shaykh al-Albaanee, that is not for them, but it is against and that will be covered shortly.

Refer to the article (صد البغي والعدوان عن الخليفة الراشد عثمان) which has been use for this article for further details on this matter.