There is a matter that is took place around 18 months ago whereby Shaykh Rabee' had rightfully declared al-Hajuri as a "Haddadi" extremist. When the Hoothee Rafidah began to attack Dammaaj, the Shaykh was concerned for the da'wah and continued to give leeway for al-Hajuri to return to the truth, and showed benevolence to him. In the course of these events, the owner of the Oloom website (Khalid al-Gharbani) spread some things he claimed about Shaykh Rabee (after a meeting with the Shaykh) which were lies. In this article we are going to document the exposition of Khalid al-Gharbani in this particular episode. Some brothers wrote about this on the Arabic forums and we present here all the wathaa'iq (documentary evidences). Though this document was prepared around 14 months ago it was not published. As more and more disgraces of al-Hajuri and al-Hajaawirah are becoming public knowledge, it is necessary to add this to the list. Having said all of this, the Hajaawirah are no longer in a position to make this denial of Shaykh Rabee' declaring their leader to be Haddaadi, because now they are attacking Shaykh Rabee' openly, but it just shows how their desires play with them as events transpire and how they follow desires and not the truth.

First, they showed outward respect for Shaykh Rabee because he had not spoken against Yahya al-Hajuri (whilst showing patience with respect to him). Then when speech started to come out from the Shaykh and clear things were narrated, they started attacking the Shaykh with vile insults, including al-Hajuri himself (see here). Then when the Hoothees attacked Dammaaj, and Shaykh Rabee continued trying to soften al-Hajuri's heart, Khalid al-Gharbanee spread lies with respect to a meeting that took place with Shaykh Rabee and on account of that the Hajaawirah once more began to respect the Shaykh because they were led to believe (through the lie spread by al-Gharbani) that Shaykh Rabee never declared al-Hajuri to be Haddadi. Then when it became clear that al-Hajuri is stubborn and arrogant and continued in his ways, the Shaykh spoke of him and affirmed that he is Haddaadi. So here they once more began their attacks against the Shaykh! There is only one word, "hawaa." What follows below is an elaboration of part of this story.

First of all please download all of these materials onto your hard drive for inspection:

Who is Khalid al-Gharbani? Khalid al-Gharbani is the owner or adminstrator of the Oloom website which is the springboard for the Haddaadiyyah who have gone to extremes to launch attacks against the Scholars, Shaykhs and students from Ahl al-Sunnah, expelling them from Salafiyyah (upon other than sound principles) and fabricating much lies against them. It was from here that Shaykh Rabee', Shaykh Ubayd, Shaykh Muhammad bin Haadee and Shaykh Abdullah al-Bukharee amongst others were attacked and accused with vile things and addressed with insults.

The Report That Was Spread Containing Fabrications Against Shaykh Rabee. A few months ago (early 2012), al-Gharbani spread the following (which was subsequently translated and spread through the email lists of those following the ways of those who go beyond bounds in tabdee'): 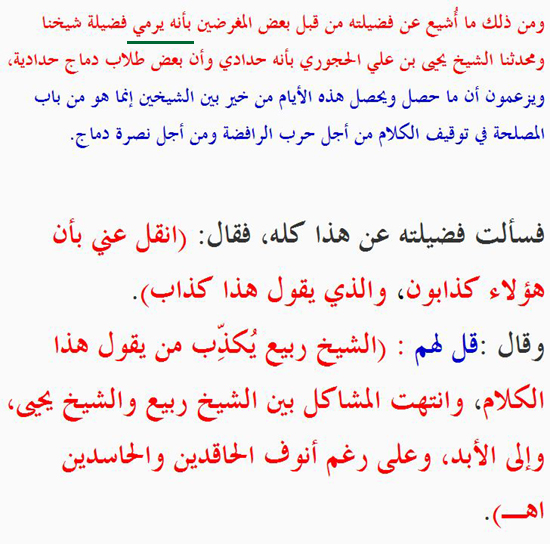 Here in the above it is claimed that Shaykh Rabee declared those as liars who said that the Shaykh declares Yahya al-Hajuri a Haddaadi and that the Shaykh is taking a path of conciliation with Yahya al-Hajuri due to the difficult circumstances the people of Dammaaj are facing from the Hoothee Rafidah. This was spread via email lists, forums, blogs. It is not denied that Shaykh Rabee indeed reached out to Shaykh Yahyaa, whoever knows the Shaykh (for the past twenty years or more) will know that the Shaykh is the most ardent of people in never closing the door on those in whom errors have appeared, and for whom return and recantation is still hoped.

Refutation of the Liar, al-Gharbaani From Numerous Angles.

The First: Shaykh Rabee' spoke against this man (al-Gharbani), and labelled him with the following (حدادي, إخواني, مدسوس, كذاب), "a Haddaadee, Ikhwaanee, an infiltrator, a liar", and the Shaykh also stated that al-Gharbani, "distorted his words," "clipped his words", "played with his words" and "did not quote his words in the proper manner". These are eight descriptions which you can hear in the audio clip which is here: (mp3) This is the first angle from which al-Gharbani's report above is questioned. In other words, he is disparaged and declared a liar, distorter of words.

The Second: Those who heard Shaykh Rabee' describe Yahyaa al-Hajooree as a "Haddaadee" are numerous and are known to be reliable and trustworthy and from them: Shaykh Abdul-Aziz al-Bura'ee (mp3) who said: (الذي سألني عنه : هل قال الشيخ ربيع : يحيى الحجوري حدادي قلت له : نعم قالها الشيخ ربيع), and this was even distributed and spread on the Oloom website itself when those following the way of the Haddaadiyyah on that website were in the period of their misguidance in which they were attacking and reviling Shaykh Rabee' as is well known. Also, this has been releated from Shaykh Rabee by Shaykh Abdullah al-Bukharee, Shaykh Uthmaan as-Saalimee, Shaykh Ahmad az-Zahranee, Shaykh Mustafa Mubrim, Shaykh Muhammad al-Umree, Shaykh Hani bin Burayk al-Adanee. All of these are alive and accessible for whoever wants to verify. Is al-Gharbani therefore, the one who has been declared a liar, distorter, a Haddaadee plant (amongst Ahl al-Sunnah) by Shaykh Rabee himself - is he truthful and are all the above liars? This is aside from the fact that al-Gharbani and others were using the speech of Shaykh al-Bura'ee who narrated the jarh of Shaykh Rabee' upon Yahya al-Hajuri as a means to facilitate the attack upon the honour of Shaykh Rabee, so at that time they had accepted it as true and used it to launch attacks against Shaykh Rabee' and out came the poets of al-Hajuri insulting Shaykh Rabee' in poetry and when al-Gharbani put out this lie, they started to deny it (based upon what al-Gharbani claimed). What haphazard people!

The Third: Naturally, the Haddaadiyyah on Oloom then differed based upon the effect of this claimed report from al-Gharbani and some of them claimed that Shaykh Rabee had allegedly "recanted" from his older position! In other words they did not deny and dismiss what was established previously. This is found in the thread that was originally started by al-Gharbani on the Oloom website, where one of them Muhammad al-Suwaree implies that Shaykh Rabee' has "recanted", i.e. from his earlier position on stating al-Harjooree is a Haddaaddee. See this attached HTML file from their website (zip file). No doubt, this put the Haddaadiyyah into confusion as there were found amongst them a) those who denied outright that Shaykh Rabee had ever spoke against Yahya al-Hajooree with this label and b) those who claimed that the Shaykh had "recanted" and thus these deceived ones wanted others to recant for what they themselves used to affirm and propagate previously on account of which many of them attacked Shaykh Rabee. Strange people.

The Fifth: These Haddaaddiyyah were the same ones who spoke with vile insults against the Shaykh after it had reached them that the Shaykh labelled Yahya al-Hajuri a Haddadi, and this a small sample from their dictionary of insults, (غراب البين وكذاب وماكر ومحرش ومهيج وثائر على الدعوة وعميل للمخابرات وصاد عن سبيل الله وأنَّ الحدادية هي من صنعه وأنه هو من أوجدها بل ودعوا الله عليه بأن يقطع لسانه), "a crow, a liar, a plotter, inciter (of dissension, confusion), stirrer against the da'wah, working for the secret services(!), one who prevents from the path of Allaah, that he is the one who manufactured the Haddaadiyyah, that it is from his own handiwork, and they even made dua against him that Allaah cut his tongue." This, in a nutshell, is the extremism of these people and their going beyond bounds in insulting the Scholars of Salafiyyah.

The Position of Shaykh Rabee. The Shaykh is the most desirous of people for uniting the word and the most patient of people - even when he himself is personally attacked and oppressed (by the very ones he is trying to advise for the sake of Allaah). The Shaykh was very grieved by the attack of the Raafidah against Dammaaj. In this period, naturally, Yahya al-Hajuri was diverted from his attacks, insults and revilements against the Mashaayikh, and his speech about them reduced due to these circumstances. Shaykh Rabee' would also give him sincerely fatherly advice. After this, al-Hajooree's speech against the Mashaayikh appeared to stop, even if he would make the odd remark and insinuation here and there. But despite this, he had still not recanted and taken back much of what he fell into for which he was criticized by other Mashayikh. However, what al-Gharbani had done was to distort whatever conversation he had with Shaykh Rabee and then entered lies into it in order to make the situation look other than it really is. Despite the final attempts by Shaykh Rabee in leaving the door open for al-Hajuri, al-Hajuri did not take heed and continued upon his insolence, arrogance and Haddaadiyyah. And this is why Shaykh Rabee affirmed again earlier this year, (أَضَرّ النَّاس بِالدَّعْـوَة السَّلَفِيَّة، لاَ أَحَد أَضَرَّ مِنْ يحيى), "The most harmful of people to the Salafi Da'wah, there is no one more harmful than Yahya" and (وَتَلامِيْذُهُ غُلاَة، غُلُوٌّ لاَ نَظِـيْـرَ لَهُ), "His students are extremists (exaggerationists) with a ghuluww that has no equal."

It is affirmed that Khalid al-Gharbani established himself a liar because when the lie against Shaykh Rabee was exposed, al-Gharbani rushed to edit what he claimed to quote from Shaikh Rabee. Below, we have two screenshots of the same thread page, one is the original fabrication, and then we have the second, after some editing had taken place. Here then are the two screenshots. Al-Gharbani's original (containing fabrications against Shaykh Rabee):

After al-Gharbani's editing of the page, revealing the reality of his fabrications against Shaykh Rabee: 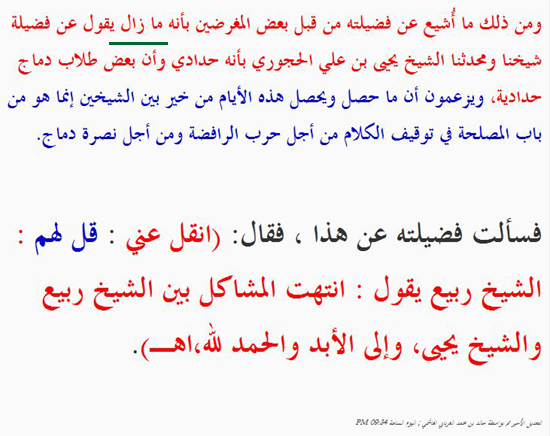 You can download the saved HTML pages from their forum where the above two screen shots are taken from from here: (original post) and (amended post)

Pay notice to the following points:

The first: In the first screen shot, look at the part underlined in green where it says ( بأنه يرمي فضيلة شيخنا ومحدثنا الشيخ يحيى بن علي الحجوري بأنه حدادي ) which means that Shaykh Rabee' "that he accuses..." (i.e. al-Hajuri of being a Haddaadee). In the second screenshot, it has been changed to ( بأنه ما زال يقول عن فضيلة شيخنا ومحدثنا الشيخ يحيى بن علي الحجوري بأنه حدادي ) which translates that Shaykh Rabee', "... that he has not ceased saying..." (i.e. about al-Hajuri that he is a Haddaadee). This change in wording means that al-Gharbani declared himself a liar and established himself a liar, and further that he is very deceptive in that he did not recant and acknowledge his fabrication. Nevertheless, it still exposed him and it establishes that al-Gharbaani now affirms that Shaykh Rabee labelled al-Hajuri as a Haddaadee - because his attacks and revilements against the Mashaaykh of Ahl al-Sunnah were pure transgression, upon the usool of the Haddaadiyyah in expelling others from Ahl al-Sunnah on account of things that do not even necessitate that.

However: Even after al-Gharbani edited the post, Shaykh Rabee was still unhappy because al-Gharbani had still not conveyed the words of the Shaykh truthfully and the Shaykh continued to request al-Gharbani to truthfully convey what he actually said. This is the way of the Haddaadiyyah! They spread blatant lies against the eminent people of knowledge with no shame, and when they are caught out, they do not make any tawbah or any rectification. Likewise here in the West, those who spread this kalaam of al-Gharbani containing fabrications and lies, it is unlikely they will make tawbah for spreading these distortions about Shaykh Rabee.