Abu al-Hasan al-Ma'ribee was an Ikhwani plant and innovator who came to harm the Salafi Da'wah, openly announcing his revolution around 12 years ago. Alhamdulillaah, he was exposed and refuted by the Scholars at the head of them, Shaykh Rabee' bin Haadee. What has transpired since then until the revolutions in Egypt starting a few years back has proven everything for which he was refuted for by Shaykh Rabee' and the true and real intent of his vile, Ikhwani principles. His son, Hasan, is reporting on his Facebook page that his father (al-Ma'ribee) met with Yahya al-Hajuri al-Haddaadi recently. The meeting of a revolutionary Mumayyi' with a revolutionary Haddaadi both initiating their revolutions to bring down the Salafi scholars and harm the Salafi da'wah. 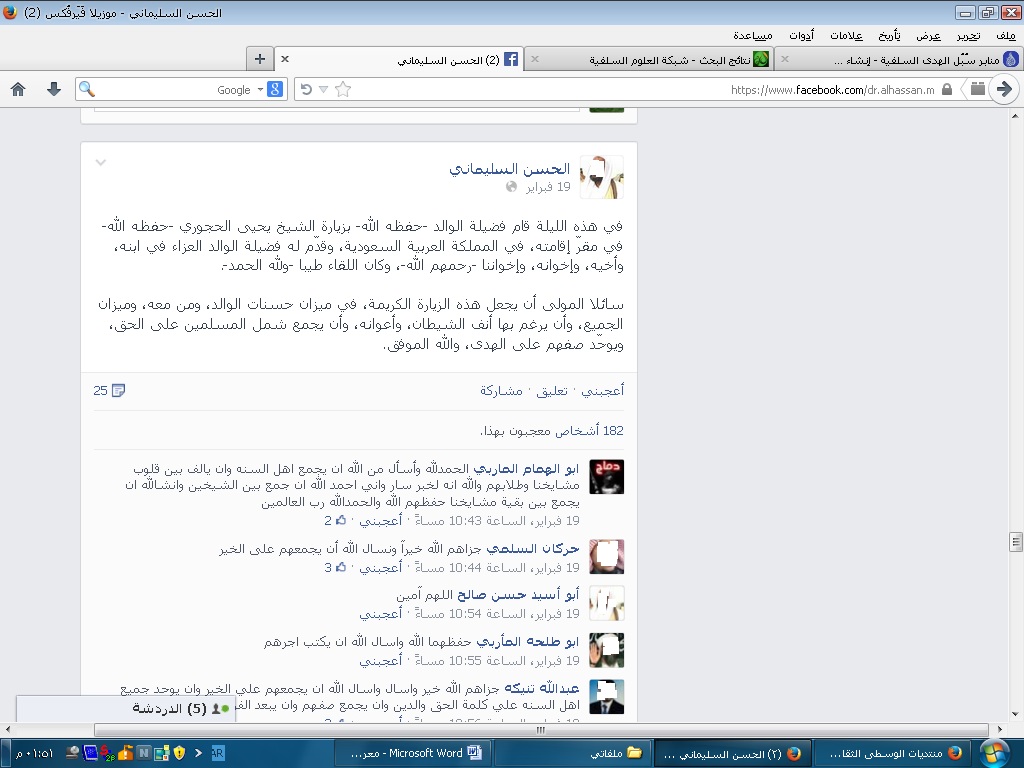 19th February [2014]. On this night, the respected father - may Allaah preserve him - embarked to visit Shaykh Yahya al-Hajuri - may Allaah preserve him - in his residential abode in the Kingdom of Saudi Arabia, and he presented him condolences for his son and his brother, and his brothers and our brothers - may Allaah have mercy upon them, and the meeting was good and all praise is due Allaah. Whilst I ask Allaah that he makes his noble visit in the scales of good deeds of (my) father, and whoever was with him, in the scales of all of them in spite of Shaytan and his helpers and that he gathers the Muslims upon the truth and unites their rank upon guidance, and Allaah grants success.

Shaykh Rabee' is an Imaam in the Sunnah and when the Innovator, Yahya al-Haddaadi tried to get an audience with him last week, the Shaykh rejected him and denied him (see here). As for Yahya al-Hajuri, then according to the report above, he welcomed the Innovator and mischief-maker, Abu al-Hasan al-Ma'ribee... If this report is verified and authentic, then it demonstrates those who have principles which they stand up for and those who do not have principles... but games and politics. Yahya al-Hajuri's recent visit to Saudi Arabia to get audiences with Mashaayikh, some of those whom he reviled and abused with filthy language shows his lowliness and his political games, may Allaah protect the da'wah from him and his likes.

The above also comes as Shaykh Rabee' explained last week that the Haddaadiyyah and Mumayyi'ah are coming together in order to fight against the people of the Sunnah and indeed matters appear to be unfolding along this direction, Allaahul-Musta'aan. This will also help you to understand why some of those affiliated with Abu al-Hasan al-Ma'ribee and the Mumayyi' crowd in general are praising and extolling Yahya al-Hajuri al-Haddaadi with a similar type of extremism adopted by al-Hajuri's students - see this article. This also reveals that all that attachment to the book of Shaykh Abdul-Muhsin al-Abbaad (hafidhahullaah), "Rifqan Ahl al-Sunnah" was a facade. These affairs taking place remind you of the two sides of the coin of Ikhwan al-Muslimeen. The lenient side which accommodates the innovators and the harsh side that makes Takfir of the rulers and scholars. Lenience and harshness (as two routes for the same objective) have been brought into the Salafi da'wah by external plants. So al-Ma'ribee took the route of lenience (tamyee') towards the opposers and detractors from the Salafi aqidah and manhaj and al-Hajuri played the role of extremism and harshness (to undermine the Salafi Scholars).