The Hajurites are funny. One time they caution against taqleed (of Shaykh Rabee for example). Then in the next moment, they use the kind gesture of a Scholar (Shaykh Rabee) towards one with mistakes (al-Hajuri) as proof there are no longer mistakes and everything is patched up between them and that anyone who does not take from them is a follower of desires and is throwing the speech of the Shaykh (Rabee) behind his back. Then in the next moment, they are warning from blind-following Shaykh Rabee again when the Shaykh makes tabdee' and warns from al-Hajuri. Then when al-Hajuri visits Saudi and happens to meet some of the Mashayikh (by seeking them out), these meetings are used as proof that al-Hajuri is sound, otherwise why would Scholars meet with him (see this discussed here). 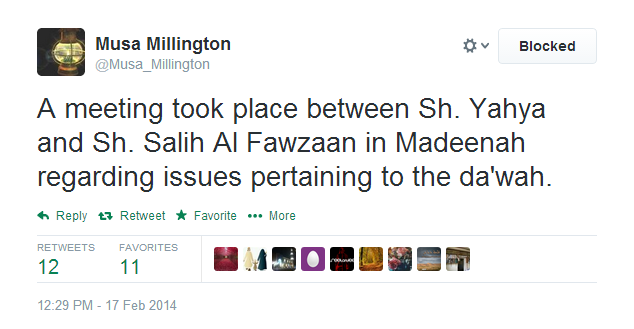 You can see in all of this, the pure following of desires, and there is no consistent principle at work except for one and only one: Defend his royal highness al-Hajuri at all costs. This is the ultimate principle of all principles, and it is applied even at the cost of revilement upon the Sahaabah (radiyallaahu anhum). Some of the Scholars do not know about everyone who comes to visit them (or engineers visits with them) and certainly they do not know from al-Hajuri what they consider to be innovation and misguidance, even though they have statements and judgements that convict al-Hajuri and his likes.

Here we have another statement of Shaykh Saalih al-Fawzaan, this time dealing with the issue of the narration of Ibn Umar relied upon by the Hajurites. This narration is not authentic and is munkar for reasons outlined by Shaykh Rabee (see this article), but upon the argument it is authentic, it can still be explained in a certain way, which has precedence.

You can download the audio file (mp3) or you can listen to the recording below:

Esteemed Shaykh, may Allaah grant you success, in the first adhaan for the Jumu'ah prayer, is it repeated alongside the mu'adhdhin?

Yes, it is an adhaan, it is a legislative adhaan because it is the from the Sunnah of the rightly-guided caliphs, it was commanded by Uthmaan (radiyallahu anhu), the third caliph. And it was in the presence of Ali bin Abi Taalib from the rightly-guided caliphs, and in the presence of the Muhajireen and Ansaar and no one rejected that from him. Except what is reported from Ibn Umar as is mentioned by Ibn Abi Shaybah in his Musannaf, that he (Ibn Umar) says it is a bida'ah and Ibn Rajab (rahimahullaah) when he cited the speech of Ibn Umar he said that he intends the good bid'ah (the good innovation) [with its linguistic meaning], he does not intend the evil bid'ah [with its legislative meaning], similar to what his father (Umar) said regarding the tarawih prayer, "What an excellent bid'ah this is", meaning an innovation linguistically and not a innovation legislatively (speaking). Yes.

Of what benefit is it to boast about al-Hajuri meeting with Shaykh al-Fawzaan when the speech of Shaykh al-Fawzan convicts al-Hajuri and renders him a mubtadi' (see this fatwa of the Shaykh). It shows these people have no consistent principle. Shaykh Rabee says al-Hajuri is Haddaadi. Don't blind follow Rabee, he would not like that would he? Then Shaykh Rabee tries to give rope to al-Hajuri, shows some kindness. Hey, why don't you take from Rabee now? Then the Shaykh declares al-Hajuri most harmful upon the Salafi da'wah, his students as extremists (Ghulaat) and al-Hajuri a Haddaadi, Mubtadi'. Hey, Rabee is not a Prophet! Then they boast, al-Hajuri met with the Muftee, with al-Fawzaan, with so and so... And then when you present to them the judgements and rulings of these Scholars and within such rulings you find what necessitates tabdee' of al-Hajuri. No response, silence. So it is established we are dealing with the people of desires.