And it is innovated, as all of the Scholars of Islaam are united upon. Do you not see in the hadeeth that the Messenger of Allaah (sallallaahu alayhi wasallam) is warning you from the newly-invented affairs and says, "It is misguidance"?

This is disrespectful and is a revilement and belittlement of Uthmaan (radiyallaahu anhu) because the way al-Hajuri is speaking, he is more or less addressing Uthmaan (radiallaahu anhu) when he says, "Do you not see in the hadeeth that the Messenger of Allaah (sallallaahu alayhi wasallam) is warning you..."

For Uthmaan (radiyallaahu anhu) opposed a clear text from the action of the Prophet (sallallaahu alayhi wasallam) in that he did not used to do this adhaan. 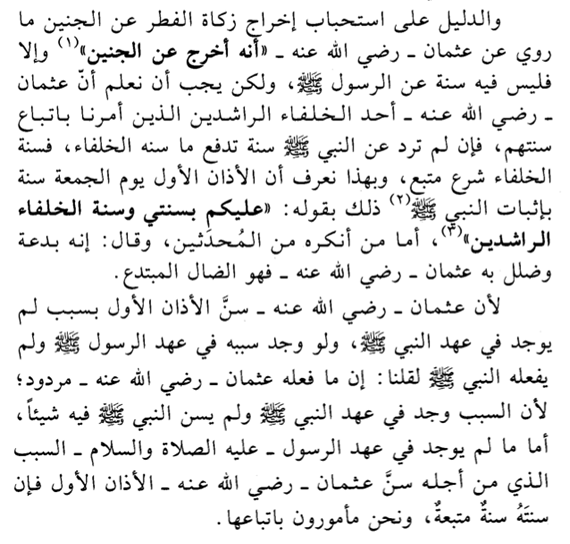 However, it is necessary for us to know that Uthmaan (radiyallaahu anhu) is one of the rightly-guided caliphs whose Sunnah we have been ordered to follow. If there is not a Sunnah related from the Prophet (sallallaahu alayhi wasallam) repelling what the Caliphs instituted then the Sunnah of the Caliphs is a followed legislation. From this we know that the first adhaan on the day of Jumu'ah is a Sunnah by affirmation of the Prophet (sallallaahu alayhi wasallam). This is due to his saying, "Upon you is to follow my Sunnah and the Sunnah of the rightly-guided Caliphs." As for the one who rejects it from the newly-arisen ones and says, "It is a bid'ah" and declares Uthmaan (radiyallaahu anhu) to have been misguided (in his action), then he is the astray innovator.

Note, in the Shaykhs' statement above is an indication of the error in the dependence of the Hajurites upon the speech of some scholars like Shaykh al-Albaanee (rahimahullaah), which they wrongly think to be in favour of them, when it is in fact against them. More on this in a separate article inshaa'Allaah and it will show you the difference between firmly-grounded Scholars and rash, hasty, crude people like al-Hajuri.