The Shaykh of the Hajaawirah, the Safeeh (Fool), the Fattaan (Fitnah Maker), Vile of Tongue (Sayyi' ul-Lisaan) Yahya al-Hajuri was recently observed in the city of Makkah following his sacking from Dammaaj. Al-Hajuri turned the love that Shaykh Muqbil implanted in the hearts of the Yemenis and the students of knowledge towards the Salafi Scholars into one of hatred and disdain and began belittling the choicest of Companions, finding fault with them, accusing them of bid'ah and at the same time inculcating a vile type of fanaticism, exaggeration and extremism, the likes of which is found amongst the Sufis. With much dismay and grief, Dammaaj was effectively sacked recently at the hands of the Raafidee Houthis. Thousands of families (many of them foreign students who had come to seek knowledge for the sake of Allaah) were forced to leave and are currently in a dire situation (may Allaah grant them relief and a way out). The intelligent person must surely observe lessons, admonitions and warnings in all of this. For when a man begins to belittle the Companions and exaggerate in his own status and worth and speak with the Scholars of Ahl al-Sunnah with evil speech, he is inviting calamities...

Al-Hajuri Grovelling in the Streets of Makkah

Reports have come from the trustworthy and reliable that Yahya al-Hajuri al-Haddadi tried to get an audience with Shaykh Rabee bin Haadee al-Madkhalee today, Monday, 10th Rabee al-Thaani 1435H (February 10th 2014H). Abu Ziyad Khalid Baqais wrote: "Al-Hajuri prayed in the mosque of our Shaykh, and Shaykh Rabee prayed in a different mosque and refused to receive him." And Haani' bin Ali bin Burayk wrote: "Narrate from reliable, trustworthy ones that our Shaykh, the notable (Scholar), Rabee refused to receive the Shaykh of the Hajaawirites, al-Hajuri, and this was tonight." 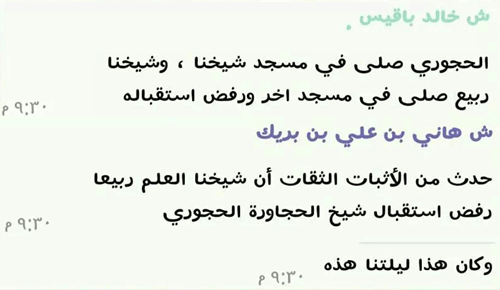 This extremist fool had been receiving advice, admonition and correction from Shaykh Rabee for at least 7-8 years, and likewise from the Shaykhs of Yemen. However, he refused and unleashed the reins of discord, falsely accusing others of hizbiyyah on flimsy grounds, then stoking up conflict, discord and animosity. The end result is what has been observed tonight where he has come to Makkah grovelling but has been rejected and refused an audience. The lowliness of al-Hajuri becomes readily apparent when you see how he spoke of Shaykh Rabee during the fitnah (see this article for evidence), words such as "affaak (fabricator)", "kadhdhaab (liar)", "speaks out of following desires and shaytaan", "strives to set up a hizbee centre in Fayoosh", "person of destructive calamities", "calumniator", "the desires fester and flow in him", "may Allaah cut your tongue", "may Allaah fight you", "put my efforts and your efforts on the scale and we will see whose is more..." and what is more.