In our detailed rebuttal of the attempts of the Haddadi Hajurites to accuse Shaykh Rabee and the Salafis in general of Irjaa' mention was made that some of them have followed the way of the new wave of Haddadis such as al-Ghamidi, al-Juhani, al-Jarboo and others and that some of them (such as those in Netherlands) where showing sympathy to the Kharijite Dogs of ISIS. Refer to the article here:

An Exposition of the Attempts of the Quṭbiyyah, Takfiriyah, Ḥaddādiyyah [and Ḥajāwirah] to Ascribe Irjāʾ to Shaykh Rabiʿ. A refutation and clarification of the attempts of some of the Hajurites to follow the ways of the Haddaadi takfiris in ascribing Irjaa to Ahl al-Sunnah. PDF File.

In this article we want highlight the effect of the Haddaadiyyah of Yahya al-Hajuri and how it has pushed the ignorant and wanting of intellect from his followers into the way of thinking of ISIS - the most extreme of the Kharijites. This transition was aided by the extremist ideas of the new wave of Haddaadiyyah such as Abdullah al-Jarboo and those affected by his extremist positions which necessitate that Ibn Taymiyyah, Ibn al-Qayyim, Ibn Abd al-Wahhab, Ibn al-Uthaymeen and many others expressed statements of the extremist Irjaa of Jahm bin Safwaan. From the angle of justice, this article does not imply that all followers of al-Hajuri are upon this bandwagon and are to be tarnished with this, sufficient for their misguidance is the misguidance of al-Hajuri himself in relation to matters of aqidah and the matters of the Companions. However, there has been a clear tendency identified from some of them - due to their hatred of the Salafi scholars which they learned from al-Hajuri - to be inclined towards these extremist elements. 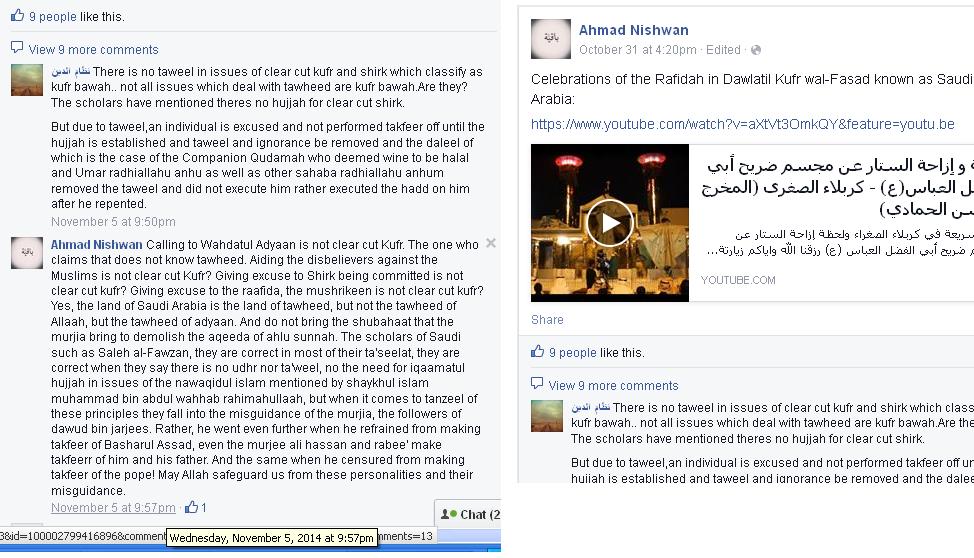 In this post this Haddadi, takfiri Khabeeth claims about Saudi Arabia:

For a rebuttal of some of these doubts refer to the PDF article above. These are very serious allegations and comprise clear explicit Takfir of the rulers and the scholars by implication.